The popularity of natural skincare continues to grow, partly because natural oils contain so many substances that have benefited the human race for centuries. One of the more recent discoveries and applications is argan oil for psoriasis from Morocco.

Morocco is a long, narrow country on the south-west coast of Africa on the Atlantic Ocean and

Mediterranean Sea. Across the Strait of Gibraltar lies Spain on the north, the Western Sahara on the South, and Algeria on the East. Much of Morocco is mountainous, but the coastal plains are productive for agriculture. Beyond the Atlas Mountains, near the Sahara desert, the climate is very dry and hot during the summer. This is where the argan (Argania spinosa) tree grows.

The argan tree once covered North Africa, and was first reported in 1510 by the explorer Leo

Africanus of Holland. It is now rare, and since 1999 has been listed by UNESCO and protected in a small area of its natural habitat. The tree grows wild in dry, desert conditions where it goes dormant, sometimes for years at a time, when there is not enough rainfall. When the tree receives moisture, it puts out new leaves. If there has been enough moisture emerge from dormancy, after blooming in the spring, the fruits are ripe in late summer.

The argan tree can live for centuries and develops very deep roots so that it can withstand the vagaries of its climate. The oil made from the fruit helps the Berber tribe to live in this harsh climate. The Berbers of Morocco use argan oil like other cultures use olive oil, both consuming it in meals and applying it to their skin, hair and nails.

About Psoriasis and Argan Oil

Psoriasis is suspected to be an autoimmune condition, so stimulating your immune system in a natural, healthy way can help to reduce inflammation. Argan oil can be used at least twice a day, including as a nighttime moisturizer, to treat areas with psoriasis. For psoriasis of the scalp, massage argan oil into the scalp at bedtime. Shampoo as normal in the morning.

Processing argan oil is a long, labor intensive process that is performed by cooperatives of Moroccan women. The women own and run the businesses, which provide an income, education, and healthcare to the formerly impoverished women and their families.

The Moroccan people have long known the benefits of argan oil, and these benefits are now being understood by applying scientific knowledge. The oil is easily and quickly absorbed into the skin, carrying with it all its natural nutrients to feed your skin.

Moroccan women have used argan oil for centuries for skin care, hair care, and nail care. Argan oil is rich in essential fatty acids that are good for your skin and good for your health when you eat them. Argan oil contains many fatty acids, including omega-3, omega-6, omega-9, myristic acid, palmitic acid, stearic acid, palmitoleic acid, oleic acid, linolenic acid, gadoleic acid, behenic acid, lignoceric acid, and arachidic acid that are used by your skin for hydration and to prevent premature ageing. 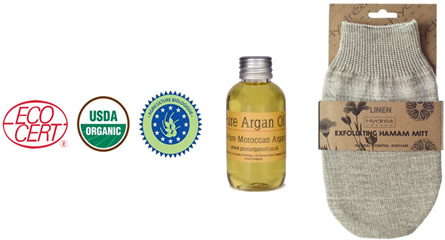 Argan oil is rich in sterols, which are used to stimulate pore detoxification and to restore your skin’s natural lipid barrier. Argan oil contains schottenol, spinasterol, stigmasta, and other sterols. Sterols make your skin feel soft and can help to reduce the inflammation associated with psoriasis. Schottenol and spinasterol are unique to argan oil, and are not found in other oils.

Argan oil is a potent source of the natural tocopherols alpha, delta, and gamma, that are also called vitamin E. Tocopherols stimulate your immune system and protect your cells from damaging environmental conditions, such as pollution and sun exposure. Tocopherols are an effective preservative, making additional preservatives unnecessary. Alpha-Tocopherol, or α-Tocopherol, is easily absorbed whether applied to your skin or eaten.

Argan oil is also a potent source of the antioxidants called polyphenols. Argan oil contains vanillic acid, syringic acid, ferulic acid and tyrosol. These antioxidants neutralize free radicals, reduce your skin’s oil production, and perform as an anti-inflammatory. Vanillic acid is a catchin metabolite that is one of the main benefits of consuming green tea. Syringic acid and vanillic acid are two of the main components of the açaí fruit. Açaí fruit have received much attention in the last few years for their high ORAC value, a scientific test of a food’s nutritional level.

Culinary argan oil is prized for its rich, nutty flavor as well as its nutrition. Chefs from all over the world use it in new creations. In Morocco, argan nuts are eaten for breakfast or made into a spread called amlou. Argan oil contains twice the vitamin E of olive oil, as well as magnesium, so it is a heart healthy snack.

Argan oil is one of the ingredients used in the traditional Moroccan hammam, a steam room much like a Turkish bath, but with Roman and Greek influences. In a hammam, women and men receive a sensual, ritual based treatment that detoxifies the body. Hammam treatments also include aromatherapy, massage, steam, and relaxation, and are partaken on a weekly basis.

Women and men go to separate hammams, where the marble walls and benches are heated from underneath by steam pipes full of hot water. Water is also splashed onto the marble to fill the air with steam and mist.

The treatment begins with allowing the skin to moisten and warm, causing the pores to open. Then a skin-softening olive soap allows for dead cells to be removed. Next, a massage glove is used to vigorously scrub and remove dead surface skin cells. The skin is thoroughly rinsed. Next, a clay mask is applied and massaged in, allowing the clay to absorb into the skin and deeply cleanse the pores. The mask is allowed to dry for 15 minutes, and then is rinsed off. After finishing the bathing process, women are massaged and the skin is rehydrated with argan oil.

When treating psoriasis, working with your body’s natural immune system is an effective treatment. Consuming argan products and using them on your skin aids your immune system naturally.

← Last Posting Dates 2011
All You Need to Know About Parabens →